Two years ago I built the Product Hunt leaderboard as a tool to identify influencers in Silicon Valley's startup scene (and made a blog post). Since Product Hunt has grown up, and with it an increase in the number of daily products submissions, votes and comments, and I thought it a fun idea to see what data I could extract from all this activity.

Product Hunt submissions have an interesting characteristic of representing a new product or venture, of which its makers identified an market opportunity and invested time and energy on getting it shipped to the public. Next to that Product Hunt's activity of votes and comments reflect how much that product resonates with the actual market. Finally only featured products make it to the homepage and reach a wider audience, which represents another curation filter.

If you add those three product submission characteristics together and group them with Product Hunt's topic and submission date you can get a cumulative product trend representing venture activity. Which is not only a fun topic, but could also provides valuable market insights.

Obligatory note; Product Hunt's topic feature has only have been available for a year, and its quality is dependent to how they are manually curated. Also products on Product Hunt are heavily skewed towards the consumer market, and some topics are easier to release a product in (e.g. chrome extension) then others (e.g. hardware) which strongly impacts the submissions metric.

The goal is to make a visualization of the Product Hunt trends, not an actual statistical analysis.

For every Product Hunt submission (70k) in the dataset I have the number of votes, comments, whether it featured on the homepage, and its connected topic(s). I filter out the submissions categories games, books and podcasts so I can focus on tech.

I group all these products under their respective topic, of which I simply calculate the topic's cumulative performance indicators (total votes, total comments, total featured).

Then the script takes into account time, by allowing a script to query my dataset by submission date in a certain period (week, month). Next to time, I add some filtering and plot it to a nice chart to cherry pick interesting exceptions.

An beautiful interactive motion bubble chart which you can explore yourself! Bubble charts are perfect for visualizations of data points with multiple characteristics, over a time period. Use the filter on the right to select your trends of interest, and the time slider to see how it evolves.

To juice things up, I did some exploring of the data myself and made it a Q&A (like i did previously on TechCrunch trends crunched and Rip Tribute to web 1.0).

What are the biggest topic growers of 2016?

Comparing Juli '15 and Juli '16 against each other.

What leads to discussion?

Instead of looking at votes, if we sort by comment quantity.

What trends are in demise?

What is the best non-US location?

There could be a much deeper level in exploring these trends, using statistics or machine learning models. Another opportunity could be in both focusing on more specific trends (within web dev or design) and matching the data up with qualitative input.
I'm thinking of investors, developer advocates or senior product people adding their own insights and analysis which provide context to identified trends. Or maybe even be able to do predictions of trends that way, which could be used as input for companies to see what to invest resources in.

If you are more interested in the topic of tech trends, and/or get involved ping me with an short email at yvo@yvoschaap.com or leave a message via @yvoschaap. 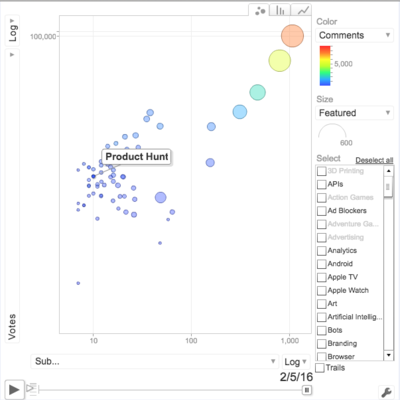